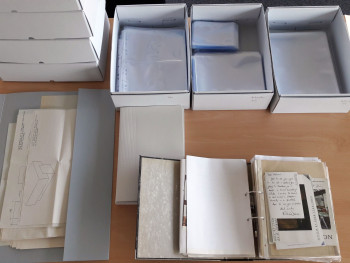 The Skulptur Projekte Archives is part of the Contemporary Art Collection of the LWL-Museum für Kunst und Kultur. The core of the archives consist of sheets in the form of concept papers, draft proposals, and drawings. There are also numerous models of realised and unrealised works, as well as correspondence between artists and curators. In addition, there are catalogs and short guides, a wealth of press, media and documentary material, photographs and videos, as well as legal and administrative documents such as contracts and authorisations. The archives document, almost seamlessly, all the steps from the preparations for the exhibitions, via the definitive establishment of the projects’ concepts, right up to their realisation and the decision on the whereabouts of art works in the museum’s collection and in Münster's urban landscape. Likewise, the archives contain documents on the works of the Public Collection of Skulptur Projekte that remained in the urban space and are owned nowadays by the City of Münster, the LWL-Museum für Kunst und Kultur, and the University of Münster.

An appointment is obligatory for on-site research. Inquiries can be directed to archiv@skulptur-projekte.de 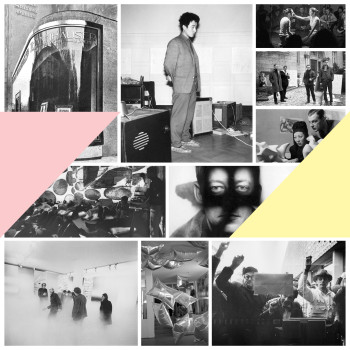 Every 2nd Thursday of the month at 6 p.m. we invite all interested guests to join our public guided tour (in German) through the exhibition "30 years of ZADIK – Highlights and Insights".

On May 25, 1992, the founding meeting of ZADIK took place. 30 years later, we are now looking at the past, present and future. The anniversary exhibition 30 years of ZADIK - Highlights and Insights provides insights into ZADIK's fields of activities and archive holdings.

Let's zoom in: Spot on ZADIK: The exhibition reveals (art) stories about exhibits from ZADIK's archive holdings: from Picasso's "La Vie", which was traded through Galerie Thannhauser and gives insights into the work's provenance, to post-war developments around Art Informel, the ZERO movement to Concrete Art, Fluxus and Happenings. Facing the questions: How did Pop Art come to Germany? And how did the 1980/90s find their way into ZADIK? In its anniversary year, ZADIK focuses on its history, the contexts of art and the diversity in the art market. 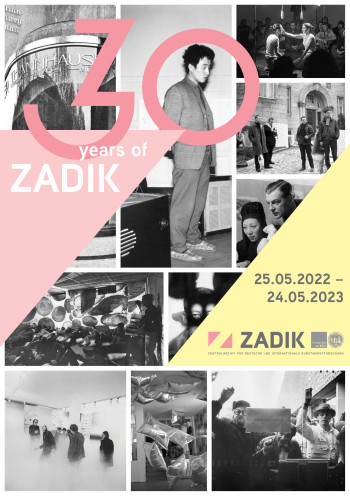 On May 25, 1992, the founding meeting of ZADIK | Central Archive for German and International Art Market Studies took place. 30 years later, we are now looking at the past, present and future. With different formats, ZADIK will accentuate and highlight various aspects in the anniversary year starting May 25, 2022. We will take a look on ZADIK’s history and its archive holdings, the contexts of art and the diversity in the art market.

The former association Zentralarchiv des deutschen und internationalen Kunsthandels (Central Archive of the German and International Art Trade) was founded in 1991 by the general meeting of the BVDG e.V., Bundesverband Deutscher Galerien (Federal Association of German Galleries). The impulse was a donation of the archive stock from the gallery Der Spiegel by Hein Stünke to the BVDG. Today, ZADIK, as an academic institute of the University of Cologne, defines itself as divided into three areas: Specialized archive, research and education institute, and cultural institution. In celebration of ZADIK's 30th anniversary, three campaigns will be realized starting in May 2022 to sustainably establish new formats of science communication:

Let’s zoom in: Spot on ZADIK

This site uses cookies to offer you a better browsing experience. Find out more on how we use cookies.